European Parliament – the Search for a Single Stance

Starting with the general, yet favourable, European Parliament resolution from 1997 (95) (see p. 130), CAM documents issued by European institutions since the late 1990s have shown an increasing awareness of the need to respect the wishes of the public and to create adequate legislation regarding CAM. This would provide non-medical healthcare with transparent regulations enabling citizens to make free and responsible decisions regarding their own health.

Although this area currently lies entirely within the competence of national governments, it is becoming increasingly clear that an appropriate pan-European strategy and coordinated approach to CAM, including the field of research, will be necessary.

The approach of the European Parliament and the Council of Europe to CAM can generally be characterized as favourable. However, they have consistently highlighted the necessity of high-quality research on the safety and efficacy of CAM methods. This would provide a basis for the subsequent recognition and legislation of these methods, i.e. integrating CAM therapies into healthcare systems.

Partially based on these documents, CAMbrella, a pan-European CAM survey providing a more concrete picture of the CAM situation in Europe, was carried out in 2010–2012.

However, the process continues. Since 2010, meetings on CAM issues have been held regularly in the European Parliament. Participants have repeatedly stated that CAM's potential to prevent disease and to promote a healthier lifestyle should not be overlooked. CAM can contribute to the long-term sustainability of European healthcare in times when its funding is facing serious problems due to economic and demographic developments. (96)

On page Call to Action you will find the full version of the statement, which was endorsed by the conference participants. The statement contains specific steps that, according to the representatives of the organizations involved, have been carried out by the European Parliament, the European Commission and the Member States' health policy makers in the field of CAM.

Six such meetings were held between 2010 and 2018, each dealing with a different aspect of the use of CAM in Europe. Examples of these aspects include CAM legislation, CAM in the context of demographic developments in Europe (healthy ageing), CAM research, the use of CAM in cancer treatment, financial aspects of using CAM, and CAM in relation to antimicrobial resistance. An overview of CAM events held in the European Parliament is provided in Table 4. More detailed reports on the content of some of these negotiations can be found on pages Cancer and the contribution of CAM and CAM: An investment in health.

April 2011
Healthy ageing, chronic disease management and the potential contribution of CAM in these areas

October 2011
The need for research into health promotion and CAM

March 2012
Cancer and the contribution of CAM

June 2013
CAM: An investment in health

The workshop Complementary and alternative therapies for patients today and tomorrow took place (97) in the European Parliament in Brussels 16 October, 2017. This event was organized by the Committee on the Environment, Public Health and Food Safety (ENVI).

“The aim of the workshop was to provide background and technical information and advice to the members of the ENVI Committee on the latest findings and trends in the field of complementary and alternative therapies. The current state of play of complementary and alternative therapies in Europe was highlighted during the first part of the workshop. Presentations focused on CAM in practice and academic research. The second part of the workshop focused on the policy and legal framework in Europe and the integration of CAM into EU healthcare systems.” (98)

Tomáš Pfeiffer, the representative of the professional chamber Sanator – the Union of Biotronicists of Josef Zezulka (KoS), and a member of the EU Health Policy Platform, was invited to participate in the meeting in the European Parliament.

A summary of the results:

“The current state of EU citizens’ health is difficult to sustain in the long term. Therefore, it is important to consider using forms of health care that are not yet officially recognized but that have been empirically tested. The necessity of further CAM research in order to find a solution to the increasing number of chronically ill patients, who do not always find effective primary care, has been highlighted. The issue of increasing antibiotic resistance has also been addressed. Here too, the importance of prevention, which is always a better choice than any treatment, is gaining ground. This is also proved by statistics stating that 197,000 Europeans die annually in Europe due to undesirable medical side effects. Prevention can potentially lower the cost of healthcare by 70% - 80%.

The presentation by the WHO representative expressed support for CAM research and stressed the need for more such research as well as the possibility to include CAM into health systems, both in Europe and globally.” (99) 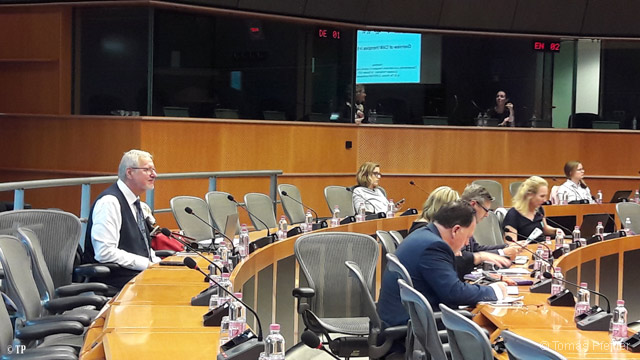