Mr. Tomáš Pfeiffer, the representative of the Professional Chamber Sanator, participated in the Sixth Ministerial Conference on Environment and Health in Ostrava. This pan-European and global event was organized by the WHO Regional Office for Europe in collaboration with the United Nations Economic Commission for Europe (UNECE) and the United Nations Environment Programme (UNEP). The government of the Czech Republic, the Moravian-Silesian Region and the city of Ostrava also took part in the preparations of the conference. On the occasion of the signing of the Ostrava Declaration, the Ministers of Health and the Environment from the Member States and representatives of public and private sectors met. The aim of the conference was to connect the various stakeholders in the Member States in order to establish a dialogue on the issues of significant environmental threats to human health. 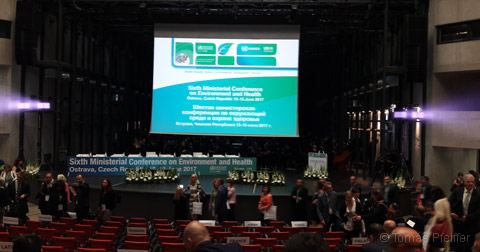 Sixth WHO Ministerial Conference on Environment and Health in Ostrava

The conference program included a number of accompanying events and lectures, where many alarming facts were presented. For example, one important piece of information was the figure of annual mortality in the WHO European Region caused by environmental risks, which can be prevented or completely eliminated. Each year, 1.4 million people die as a result of these risks, which is 16% of all deaths. (source) Determinants which significantly disrupt human health include: polluted air, deficient water supply and inadequate sanitation services, hazardous chemicals, excessive waste production, soil contamination or climate change.

The event also included a press conference attended by: Mr. Ivo Vondrák (Governor of the Moravian-Silesian Region), Mr. Tomáš Macura (Mayor of the city of Ostrava), Mr. Miloslav Ludvík (Minister of Health of the Czech Republic), Mr. Richard Brabec (Minister of the Environment of the Czech Republic), Ms. Zsuzsanna Jakab (WHO Regional Director for Europe) and Mr. Ibrahim Thiaw (Deputy Executive Director for the United Nations Environment Programme). The last mentioned emphasized the interconnectedness of the environment and the health of the population. During his speech at the conference, he said: "People pollute everything that we consume and breathe." He pointed out that only a healthy ecosystem and environment can strengthen human health and he added that the traditional medicine depends on a healthy ecosystem. At the press conference, he expressed his positive approach to the issues of complementary and non-medical treatment, accenting the growing tendency of the population to use alternative methods of treatment. During a short personal interview with sanator Tomáš Pfeiffer, both parties agreed on the importance of complementary treatment methods.